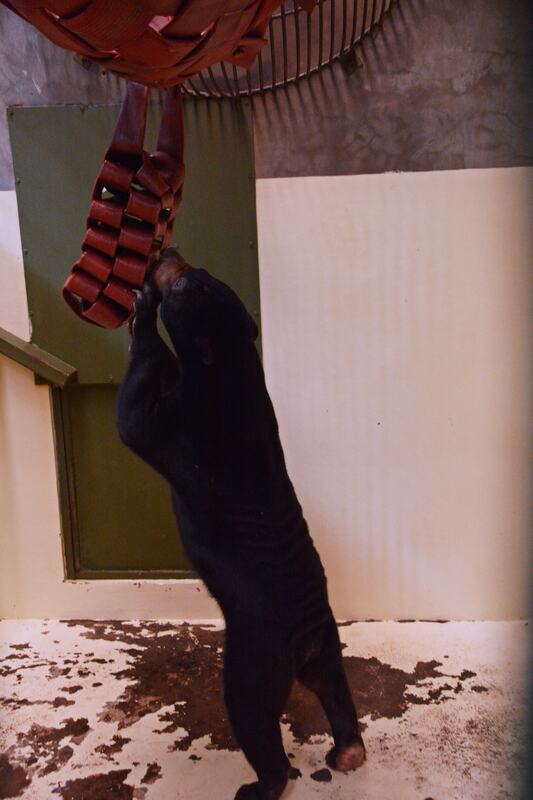 Age: 12 Years Old
​
Name meaning: His name, 'Phin' was given by his previous owner.

History: Phin was found by villagers near the logging camp in Sipitang district, Southwest of Sabah together with Sigalung, an adult male bear. He was kept as an illegal pet. He was rescued and tranferred to the Lok Kawi Zoo on 1st March 2014.

Personality: Phin enjoys climbing and resting in the big basket. However, he is still not comfortable with climbing up into his hammock. Phin loves soaking in his water container to beat the summer heat. He loves to roll on the floor when it is wet and will scratch his bottom with one paw as if he wants more when accidently sprayed with water during husbandry work. At the end of the afternoon, he will take a peaceful nap. It has been four years of Phin being too afraid to leave his training pen. He still needs to build up the courage to step into the forest. His stereotypical behaviour has now significantly increased. Phin shows more anxiety and stress when it comes to the training pen. It is believed that he probably suffered from being kept alone in a cage for so long. However, our staff will never give up on Phin so that he can grow into a trusting and confident bear. We hope he will be ready to roam in the forest enclosure and start living the bear life he deserves by providing stimulating enrichment and a proper diet. These two actions have brought loads of happiness and excitement into Phin’s life. He does not mind being in pens side by side with Mamatai and Wan Wan. However, Wan Wan’s aggressive play manner is not yet acceptable for Phin. We are hoping that a successful integration with other bear friends will bring him confidence through having playmates to explore the environment and learn to be a bear again with.​
​
Phin is available for MY BEAR adoption.