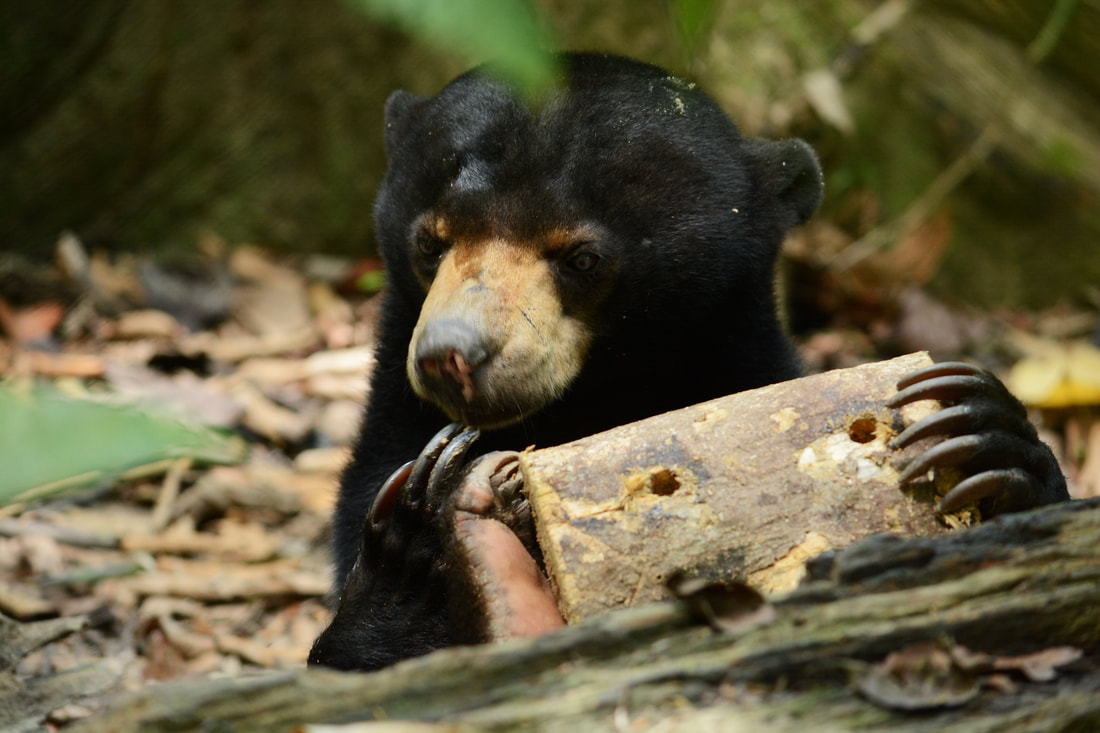 Name Origin: She was mistakenly identified as a panda bear by her previous owner.

History: Panda was found in Tawau district of Sabah and was later sent to the Kudat district, in the northern part of Sabah. Both Panda and her male companion, Kudat were displayed in a mini zoo as panda bears. They were fed with chicken daily, which led them to have bigger body sizes compared to other bears their age.

Personality: On May 20 2014, Panda had a traumatic injury on the rostral area due to some aggressive bites by a male adult in the neighbouring cage. Thank you to Veterinarian Dr. Laura Benedict from Sabah Wildlife Department, who helped to reconstruct suture of the tissue on her rostral area. Panda has beautiful mauve-coloured eyes. She delightfully splashes water and especially loves to play in her water bath when it is filled. In the morning, she can be seen using her smooth paw to slide on the floor of her den. On 1 September 2019, Panda finally took a brave step into the forest after five years of training. She is always eager to head out into the forest and loves playing in the swampy spot in her enclosure, dipping all four feet into it. Panda may also bark at strangers when she smells the scent of a new person. When it’s mealtime, she will eat the yummy fruits like banana and watermelon first before her vegetables. When she receives enrichment, she will figure it out by tapping with her sharp claws, sniffing it and confirming if the object is hollow and perhaps may contain some tasty treats, especially HONEY and fruits! Now, she is only friendly to Amaco bear. They seem to be staying well with each other. However, she does not get along well with Chin and will end up in small brawls during play fights or meals.​

Identifying mark or trait: Panda has a line around her snout, possibly from having a tight-fitting muzzle used in the past.

Panda is available for MY BEAR adoption.