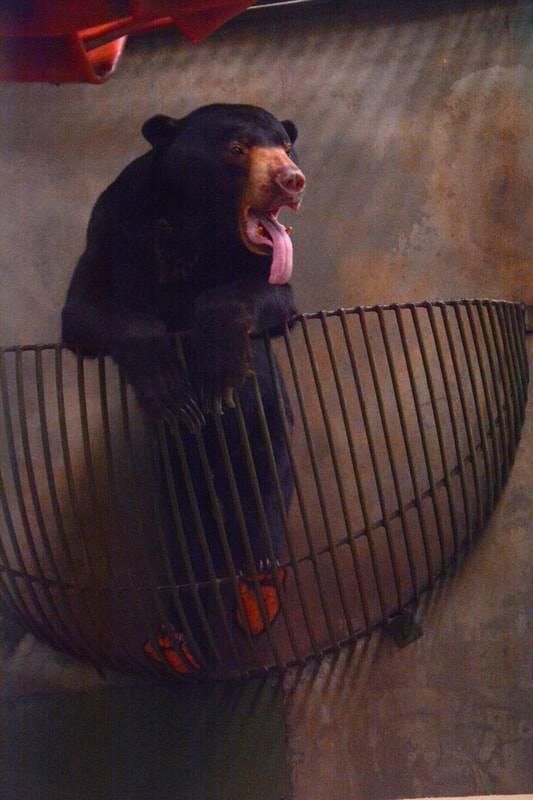 History: Linggam came to Sepilok as a cub (only 3.5kg) in August 2004 after being found at a logging camp at Kampung Pinangah. Loggers claimed that he was found alone. He was taken into the care of Mr. Awang who then gave him to the Sabah Wildlife Department. He was sent to Sepilok and was later transferred to the Lok Kawi Zoo near Kota Kinabalu. He came back to BSBCC Sepilok in July 2010. It took Linggam a while before he finally stepped outside of the indoor enclosure. He is now enjoying his back yard every day at the centre.

Personality: Linggam is best known as the prince of bears in the bear house. He is one playful and interactive bear who grabs the hearts of many (people and bears). He is a very attractive bear with big brown eyes and a gentle face. His long and slender body is coated with one of the sleekest and healthiest fur coats of all the bears in our centre. When we give him his favourite food or enrichment, it must be made with love and complete pleasure for him. If not, he will not appreciate the food or treats given to him at all as he is choosy when it comes to enrichments. So, we usually make different types of enrichment to let him choose which toys or treats he prefers. Sometimes, it is the simplest enrichment that makes a difference in the life of Linggam! He is also cheeky at times as he likes to play pretend.

He is not a ‘morning bear’ as he is often sleepy in the morning, especially when it is a gloomy day out. You can find him sleeping like a person on the floor, lying sideways at one corner like a human or curled up like a dog, as he still does not dare to go up on his hammock to rest. He does not mind water and likes to splash water out of his water bowl. When it is eating time, Linggam does not like to be kept waiting and has a habit of gathering a bunch of his food; once he receives it he then places the food in one spot at the back of his den before gobbling it up. On 28 November 2019, Linggam finally had new best female pals (Susie, Kuamut, Cerah, Jelita and Manis). He has made great friends with them. They enjoy and share different types of enrichment activities together. Witnessing the friendship that Linggam has formed was truly an unforgettable moment! We hope one day Linggam can be released back to the forest together with the five female bears and thrive in his new home.​

Identifying mark or trait: Linggam is a very handsome bear. He has a narrow muzzle, a shiny coat and is slender in stature.

ADOPTION: Linggam is available for MY BEAR adoption.