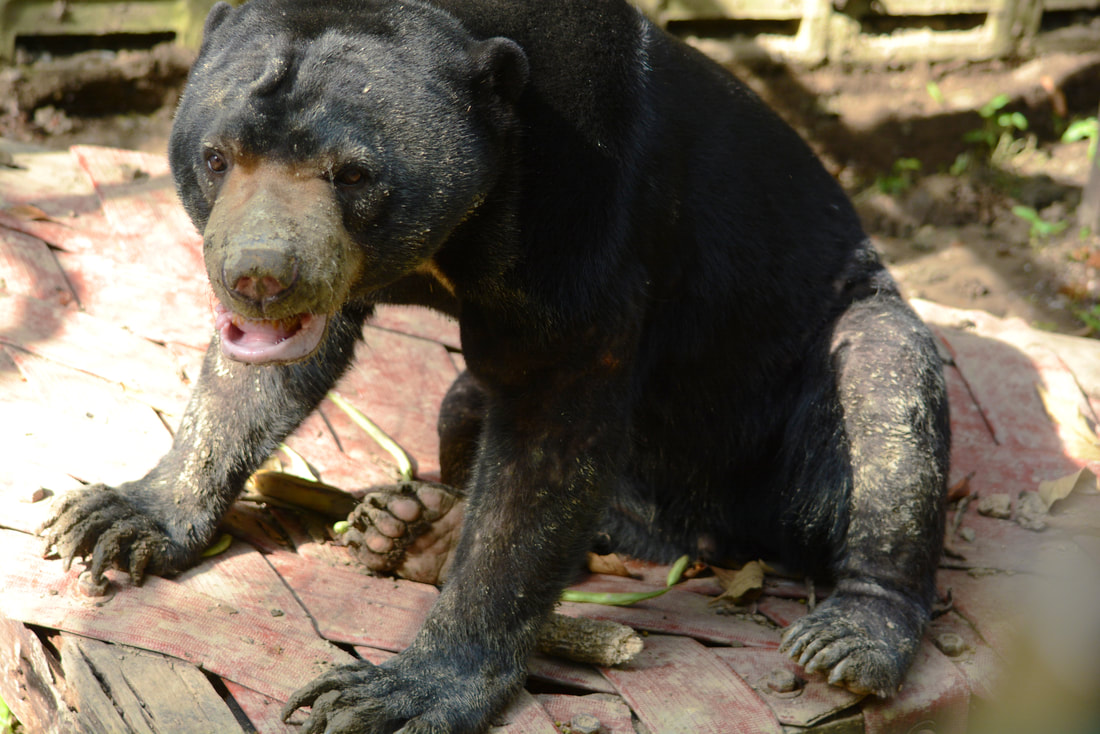 Meaning of Name: Name of a district in the north part of Sabah.

History: Kudat and his best female pal, Panda, were originally from Tawau district, south-eastern Sabah, before being sent to the Kudat district. They were previously housed in less-than-satisfactory conditions until they were handed over to the Sabah Wildlife Department & BSBCC. It is hard to believe that both Kudat and Panda were displayed as pandas in a mini zoo. These “pandas” were fed daily with one chicken each. This explains why they have a rather large body size compared to other bears their age.

Personality: Kudat is a charming bear and a kid at heart. He is physically fit. Over the past years, Kudat has spent most of his time roaming in the forest. He also remembers how to be a wild sun bear by digging at dead wood in search of insects, termites and beetles. He travels around the forest with graceful leisure and the confidence of an independent sun bear. Kudat was the first adult male bear to climb high up in the trees. He started practicing his climbing skills by heading straight to the top of the trees to explore enrichment that was hung up by keepers. He loves splashing water out of his water bowl and takes a lot of baths on the den floor, treating it like a swimming pool!

Kudat loves the Aussie Dog Ball, he will lie down on his back and work his way into the enrichment to claim his treats before bouncing it to finish up all of its contents. He is a big foodie and can be impatient when it comes to food. He will make noises showing displeasure when he sees Simone getting food before him. Kudat enjoys receiving food including watermelon, bananas, honey and special treats. He is one of the bears in our centre that eats fruit peels. Every day, he will peek through to the kitchen in the bear house from his den to check out any special treats he will get for the day. Sometimes when he sleeps in his den, he will lie down with his ears and nose twitching or legs softly kicking as though he is having a dream in his sleep.

Identifying mark or trait: Four limbs, bilateral axilia and inguinal has severe alopecia and was suspected self hair plucking.

Kudat is available for MY BEAR adoption.