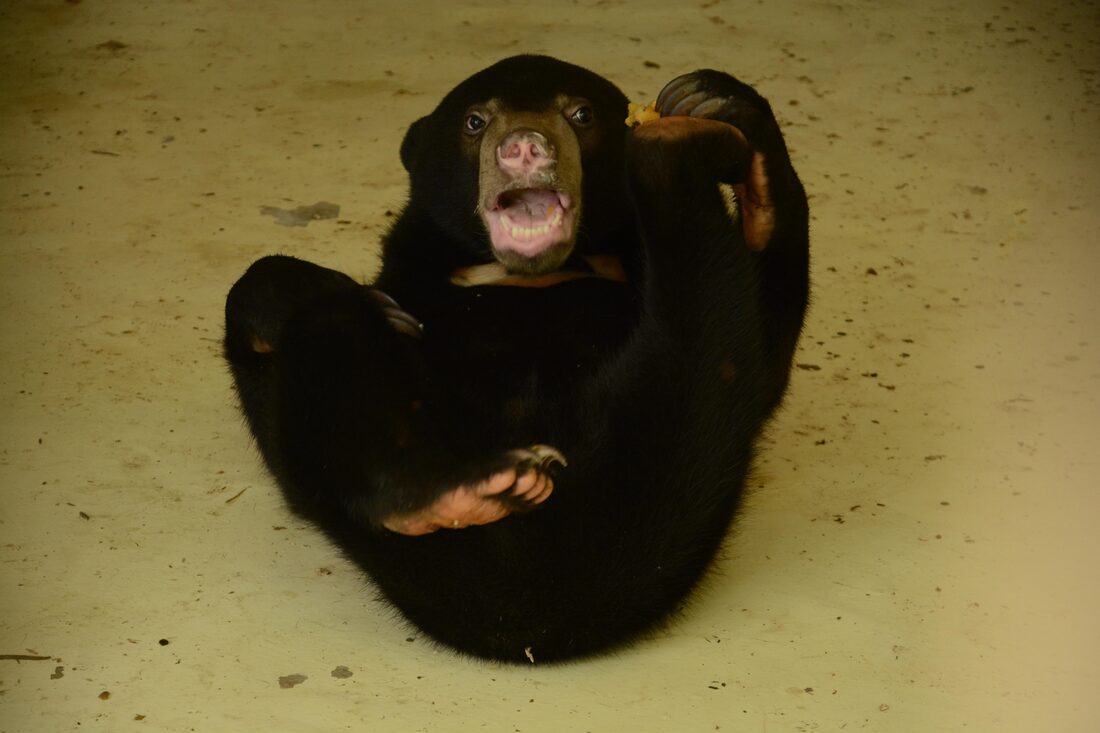 MEANING OF NAME: Named after the village he was rescued from.

HISTORY: A local resident claimed to have found him wandering alone around the forest fire area that happened a few months ago. He was believed to have been left orphaned and homeless after the fires. He was taken as a house pet in Kampung Kipaku, Tambunan. The villager decided to surrender him to the Sabah Wildlife Department’s Wildlife Rescue Unit on 16th July 2020 and he was sent to the BSBCC on 18th July 2020.

When he first arrived at BSBCC, Kipaku appeared dull, with dry hair on his coat and weighed only 7.1kg. Kipaku was stolen from the wild, growing up alone and kept as a pet has made him habituated to humans’ which means a lot to Little Kipaku. His previous owner fed him with Lactogen1 milk, rice and fried fish. Kipaku settled well in the quarantine dens.

PERSONALITY: He is the youngest male bear at BSBCC. Little Kipaku has stolen our hearts with his beautiful chest mark. His personality has begun to emerge! Kipaku has strong wild instincts - foraging, climbing and defense skills.

On 6th August 2020, he took the first steps on the road to recovery. He started a daily walk in the forest with the cub keepers, which give him a second chance to learn as a wild bear. During his first venture to the forest, he was immediately determined to climb high into the tree canopy. He is an agile and tree-loving little bear! Sometimes, he does not care whether the tree branches can support his body weight. He climbs through the branches and munches on leaves or tears the tree bark. When he misjudges a tree branch that snaps under his grasp, he will quickly grab it or fall to the ground. He prefers to spend time on the trees, chewing on the tree bark, searching for insects -skills that are essential for his eventual return to the wild. He is brilliant! He is always keen on trying out new things. He will check out every corner of the forest. He knows how to make his forest world fun! A sign that he is feeling better and learning to be a bear again! He is a baby and will vocalize his feelings. He always keeps himself busy BUT starts to become grumpy when he feels uncomfortable with something! It is remarkable to watch Kipaku explore free into the depths of the jungle. He certainly has the instincts for a future in the wild.

On the 30th July, 2020, Kipaku, met for the first time, his first bear friend, Itam. The first meeting was not pleasant. But things were better after a few integrations, and now they are getting along so well! They always stay together and play fight with pawing and wrestling. On the 25th December, 2020, Betung joined him and Itam. They are getting along. Now, they spend lots of time together in the exercise pen! Kipaku always starts to play with them. Kipaku is a foodie. He wants to be the first one to get the food. Even if he is still eating, he vocalises and warns others to stay away from his food.