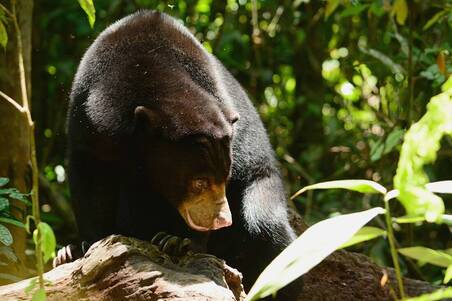 According to the IUCN Bear Specialist Group, the total sun bear population has declined by at least 30% in the last 30 years (IUCN 2007).

The sun bear has been listed on CITES Appendix I since 1979 (CITES aims to ensure that international trade in specimens of wild animals and plants does not threaten the survival of the species in the wild) and it is illegal to kill or hunt these bears in Sabah based on the 1997 Sabah Wildlife Conservation Enactment. Moreover, in 2007, the World Conservation Union added the sun bear to its “vulnerable” classification on the IUCN Red List of Threatened Species (IUCN 2007).
​ 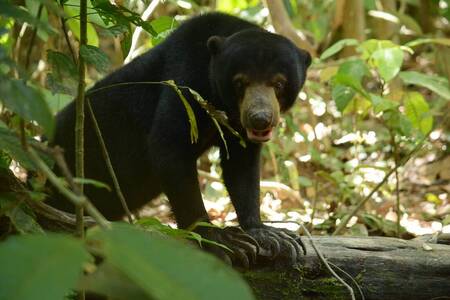 The sun bear still remains the least know about bear in the world. Many people know about polar bears, grizzly bears, American black bears and giant pandas through the Discovery Channel, Animal Planet, National Geographic Channel, movies, advertisements, news articles and new media. A small proportion of people know Andean and spectacle bears from South America, sloth bears from India, and Asiatic black bears from Asia. However, only very few people know about sun bears. This is a sad fact.

One of the biggest reasons for this is the susbstantial lack of biological studies on this species. Currently, there are only three ecological studies in the world involving trapping and radio-collaring a wild sun bear. One of them is by Wong Te Siew, Founder and Chief Executive of BSBCC. Further details of that can be found on the Research page of this website.


Reduce forest loss, poaching and bear parts
General measures to reduce forest loss and poaching would help conserve the species. The most beneficial conservation measure in Indonesia and Malaysia would be protection of remaining forests from conversion to other land-uses, eliminating unsustainable logging practices, and prevention of forest fires. Establishment of new and effectively managed protected areas in Indonesia and Malaysia should be promoted in order to preempt land conversion.  Reducing the trade in bear parts would be highly beneficial for the survival of the species in mainland Southeast Asia.

Much more work is needed to ensure the long-term survival of the native wildlife and forests. In many parts of Southeast Asia, the tropical forests are disappearing rapidly to a point where too late to do anything. In contrast, due to the economy and political stability, Malaysia still has a chance for conservationists to save the last stronghold of Southeast Asian rainforests and wildlife.

​
Sun Bear Recovery Zones
Given available resources, the patrolling and monitoring of entire protected areas is currently an overwhelming task.

To make this problem more manageable, a network of small bear recovery zones (100–200 km²) could be established within key protected areas. The patrolling efforts of rangers could then be focused on these zones. Recovery zones should be locations with plentiful bear foods such as trees from the families Lauraceae, Moraceae, Burseraceae, Myrtaceae and Fagaceae. Such zones would provide a biologically meaningful, geographically focused, and logistically realistic way for the efforts of protected area staff to be translated into population recovery for bears (and other wildlife species).

Recently, the Bear Specialist Group mapped the current, range-wide distribution of sun bears. Important habitat blocks for long-term survival of sun bears were identified (Bear Conservation Units-BCUs). Anti-poaching efforts within these BCUs should be a high priority. Trends in bear occurrence and relative abundance within BCUs could be monitored using standardized sign surveys and camera trapping. Results of such monitoring could indicate which management or ecological conditions promote successful bear conservation, and which do not, and provide a means to assess the results of conservation efforts (e.g., future range expansion and/or increased bear density being indicative of effective conservation efforts). Additional field studies also would be helpful in this regard; few intensive studies have been conducted on this species.
​

Training local students as conservationists and biologists
We need distinguished biologists to train local students as conservationists and biologists, to educate public and government on the importance of conservation, and to study the flora and fauna in order to understand better its functions. The founder and CEO, Dr. Wong Siew Te was trained as an “animal expert” or wildlife biologist for all these years. He hopes to use these knowledge and training to do a great job in his career to conserve wildlife and forests.